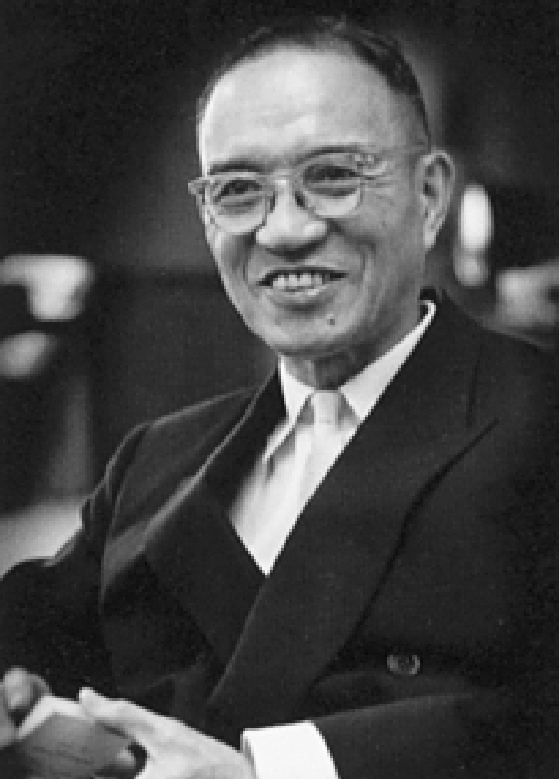 Ishibashi Shojiro was born in the city of Kurume, Fukuoka Prefecture, in 1889. At the age of seventeen, he took over management of the family tailoring business. Having succeeded in developing commercially viable jika-tabi (split-toed heavy cloth work shoes) with glued-on rubber soles, he then set his sights on manufacturing tires for automobiles. In 1931, he founded the Bridgestone Tire Co., Ltd. (now the Bridgestone Corporation), its name reversing the meanings of the characters in his surname (Ishibashi: stone bridge), and moved its headquarters to Tokyo a few years later.
The stimulus for Shojiro’s beginning to collect art seriously was reconnecting with Sakamoto Hanjiro, a Western-style painter who had been his art teacher when Shojiro was in elementary school. Sakamoto thought would be a shame if the work of the painter Aoki Shigeru, another native of Kurume and a remarkably gifted artist who had died young, became scattered and lost. He suggested that Shojiro collect Aoki’s works and build a museum for them. Moved by Sakamoto’s appeal, Shojiro began to collect modern Japanese Western-style paintings, primarily by Aoki. During the following decade, he was able to acquire Aoki’s masterpiece A Gift of the Sea along with other works and build his collection.
In addition to Aoki and Sakamoto, the work of the painter Fujishima Takeji had an important position in Shojiro’s collection. Having noticed and purchased Fujishima’s work at a solo exhibition, he became a close friend of the artist and acquired, as a single lot, fifteen works from Fujishima’s Italian period. The elderly artist had entrusted works he dearly loved to Shojiro, who from the start had been thinking of founding a museum.
The year that the museum opened was 1952, the same year that the Treaty of San Francisco was signed and Japan acquired its sovereignty, during the postwar recovery period. The Bridgestone Museum of Art’s sixty years of history places it among the rare pioneering museums in Japan, starting with its founder ISHIBASHI Shojiro’s prewar collection.