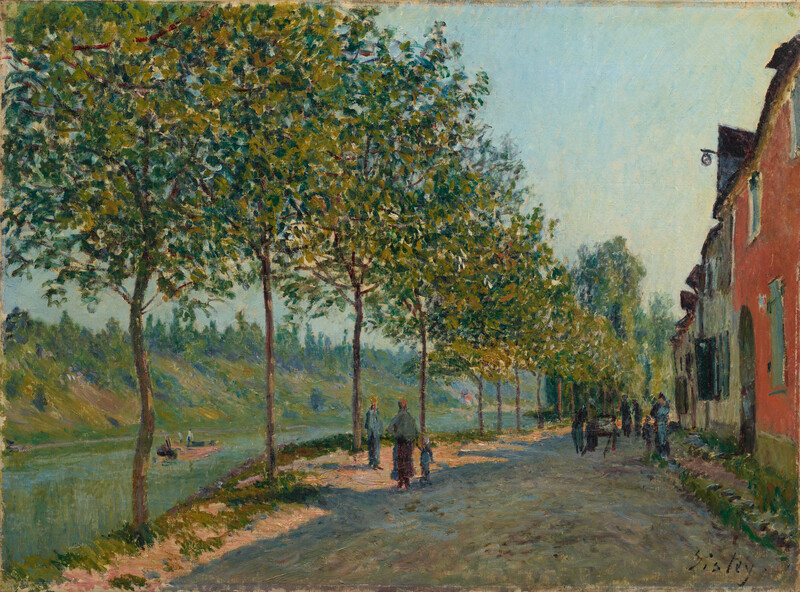 In the 1860s, Sisley, an Impressionist landscape painter, worked en plein air in the forest of Fontainebleau, about 60 kilometers southeast of Paris. In the 1870s, he painted on the banks of the Seine, west of Paris, at Louveciennes and Argenteuil. From 1880 on, he lived along the Loing River, east of Fontainebleau. Modernization had turned the Seine riversides near Paris into recreational and industrial areas, but unspoiled countryside could still be found along the Loing. The small village of Saint-Mammès, on the eastern edge of the forest of Fontainebleau, is at the junction of the Seine and Loing rivers later developed as a central junction for river traffic and shipping in central France.
This painting depicts a row of poplars along La Croix Blanche Quai, beside the Seine, on the northern side of Saint-Mammès. The Seine, a boat afloat on it, flows by on the left. On the left side of the river is the hill on which the village of La Celle is located. Unusually for Sisley, who often painted scenes bathed in light, in this painting he contrasts dark and light, intensifying the sense of depth. Shaded by the buildings, the treelined street with people passing by is dark; the use of blue to express the shadows is a characteristic of Impressionist paintings. The Impressionists, pointing out that there are colors in shadows, used complementary colors instead of blacks and grays to render them. The visible brush marks throughout this work are another Impressionist characteristic. 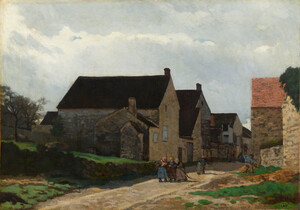 《Women Going to the Woods》 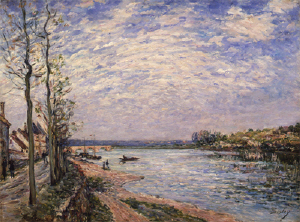 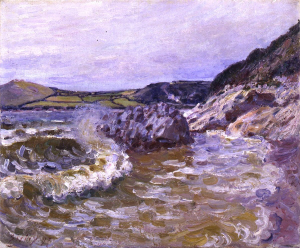