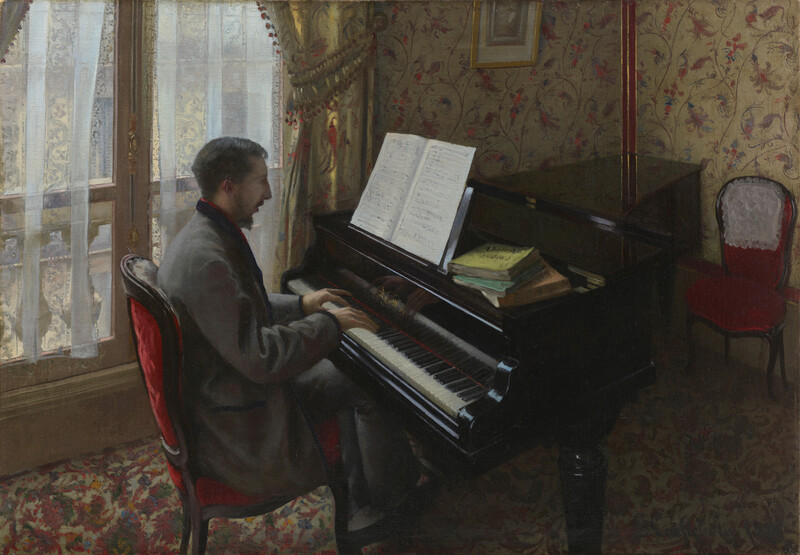 Caillebotte both showed his work in the Impressionist exhibitions and provided financial support for them. This painting depicts his younger brother, Martial, playing the piano in the Caillebotte residence on rue de Miromesnil, in Paris. Caillebotte showed it, with The Floor Scrapers (Musée d’Orsay) and four other paintings, at the Second Impressionist Exhibition, in 1876. This work attracted the most attention.
In Paris in the latter half of the nineteenth century, the piano was a symbol of upper-class status, and playing the piano was a frequent painting subject. Usually, however, the model was female, as in paintings by Renoir. This work, with the man intently focused on the keyboard, presents an interior scene in a modern urban setting. Caillebotte has depicted the elegant interior of an affluent Parisian home, with botanical motifs on the wallpaper, curtains, carpet, and chairs. The light from the window is reflected by the piano’s keyboard and legs, and the keyboard and the pianist’s fingers are reflected in the fallboard. The wall moulding is also reflected in the lid of the piano. This work, in which the delicate brushwork provides a sense of depth, differs from most Impressionist paintings, which are characterized by jaunty brushwork. In technique and subject it resembles Degas’s paintings of interiors, sharing the same themes of urban settings and the people living in them. It also reminds us that there are distinctive variations in the Impressionists’ quest to depict light and shadow. 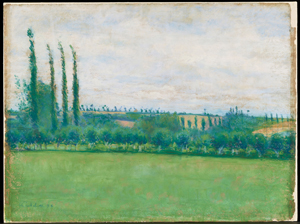