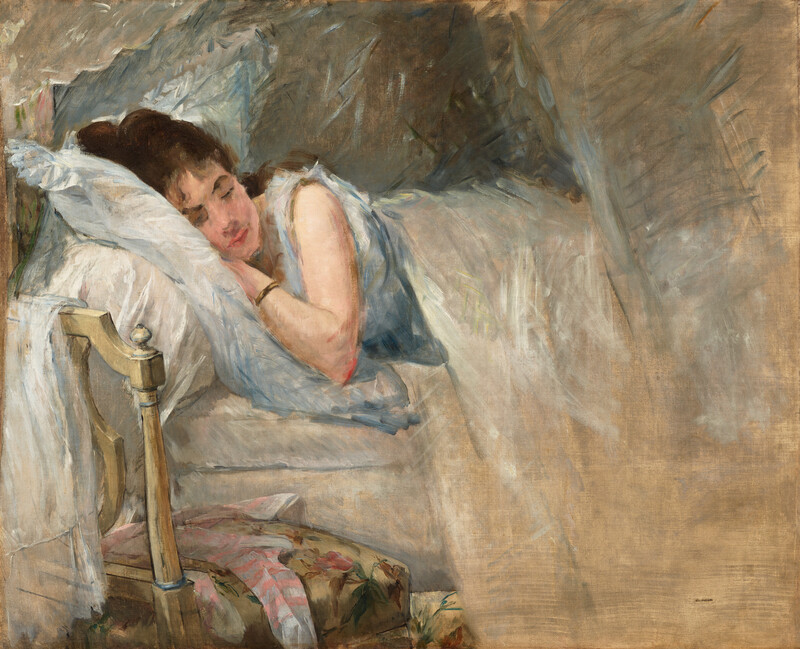 Gonzalès, a French painter, had a privileged background. Her father, a writer, was the descendant of a famous Monaco family raised to the peerage by Holy Roman Emperor Charles V. Her mother, a Belgian, was a musician. In 1869, Gonzalès was introduced to Manet by Alfred Stevens. She began as his model and then became his student. Prioritizing showing at the Salon, she declined to show work at the First Impressionist Exhibition and, like her mentor Manet, did not show at the subsequent Impressionist exhibitions. Since her style, however, is similar to that of Manet and the Impressionists, she is regarded as one of the women Impressionists.
Her younger sister, the painter Jeanne Gonzalès, is depicted quietly lying down, eyes closed, in bed in her bedroom, as the sun sets. In the foreground, a negligée has been thrown over the back of a chair. Although it is a night scene, Gonzalès uses white accents here and there. Her rough yet vibrant use of color reminds us of Manet. A masterpiece by Gonzalès, Morning Awakening (Kunsthalle Bremen) offers a direct contrast: a young woman, awakening in the morning, is depicted with a lively touch. Since these paintings have similar compositions and use the same size canvas, they are often regarded as a pair.
Share this page
Collection Highlights
Search
Search by keyword
Search by name of artist
Artists’ names (alphabetical order)