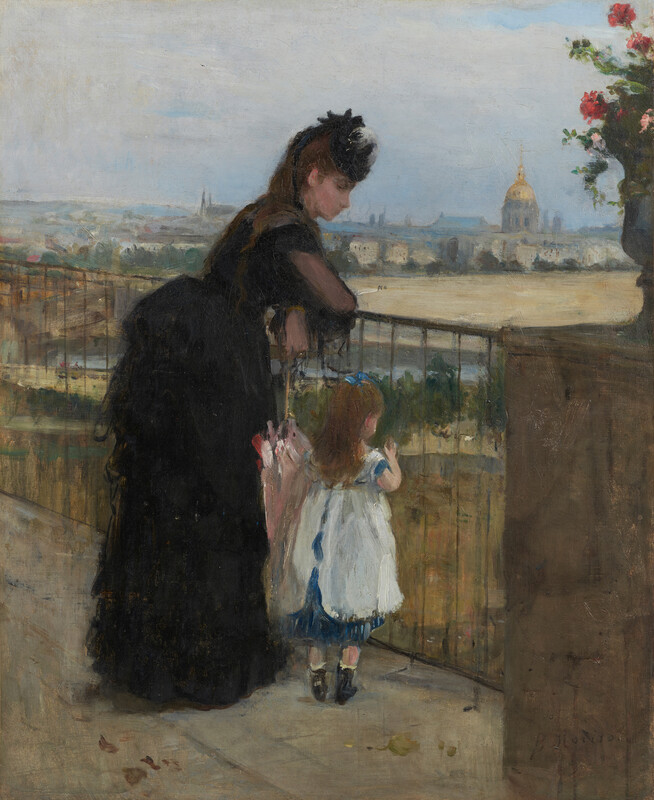 《Woman and Child on the Balcony》

Morisot is one of the few women painters among the Impressionists. Her paintings of mothers and children display a female sensibility, a sense of delicacy and restraint not often found in the male viewpoint. Woman and Child on the Balcony is one of the most highly regarded works of her career.
The setting is Morisot’s home on Rue Benjamin Franklin near the Palais de Chaillot, in one of the western districts of Paris. A well-dressed woman and child are surveying Paris from a balcony. The Jardins du Trocádero, the River Seine, and the Parc du Champ-de-Mars are included in the scene. At right, the golden dome of Les Invalides is visible on the horizon. The brush strokes are quick and energetic, yet, every detail has been attentively rendered. The background is relatively sketchy, but the red flowers in the planter at top right, the woman’s elegant dress, and the child’s costume and blue ribbon are carefully finished. The woman is thought to be one of Berthe’s older sisters, Edma or Yves. The child may be Yves’s daughter Paule Gobillard, nicknamed Bichette.
When she produced this work, Morisot was on exceedingly close terms with Manet. The two painters are thought to have influenced each other during this period. In this work, we glimpse the influence of Manet in the innovative technique used to depict a modern subject. The scenery shows the results of the rebuilding of Paris under the leadership of Georges-Eugene Haussman, Prefect of the Seine during the Second French Empire. Similarly to Manet and Gustave Caillebotte, Morisot used Impressionist techniques to capture the new urban landscape of Paris.
Share this page
Collection Highlights
Search
Search by keyword
Search by name of artist
Artists’ names (alphabetical order)